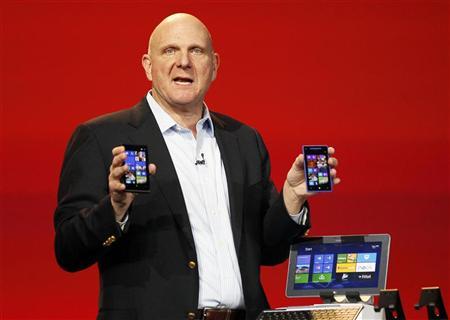 It’s no surprise that Microsoft is currently going through some changing pains. Over the past year, Microsoft has been releasing from their gates several products to rebrand themselves as a strong player against current industry giants like Apple and Google. The thing is, is it actually working?

Microsoft’s most recent products have shown some promise, but the only thing they have been living up to is falling flat in almost every arena they enter. How can we measure this? Well, according to a Vanity Fair article, Apple’s single product, the iPhone, generates more revenue than all of Microsoft’s products combined. This single product’s success if able to define Microsoft as a company, and as a brand, that’s just currently not doing too hot.

So the question the comes to mind is, who is to blame?  According to a few different articles published by Reuters and Forbes, current chief executive officer Steve Ballmer is at fault.

Steve’s mismanagement has brought the Microsoft branding down a notch, and it’s become a company that keeps releasing duds. Windows 8 had a pretty lackluster launch to date, and the Surface tablet that was released last October has gained everything except momentum. With the recent announcement of the Surface Pro, maybe something will bubble from the depths that Microsoft is in and help them out. But with a starting price of $899, that sounds like a huge maybe.

Currently, they’re playing catch-up instead of being the brand that innovates and improves. Maybe it’s time to let the reins fall into someone else’s hands, perhaps someone that could push the Microsoft brand to new heights.

One thought on “Steve Ballmer — Helping or Hurting the Microsoft Brand?”