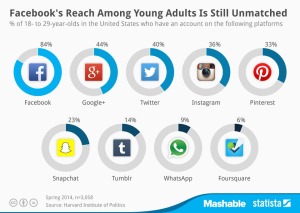 Facebook is still the number one Social Media platform among young adults. A study conducted at Harvard Institute found that a large majority of young adults, ages ranging from 18 to 29 years old, were members of Facebook while less than half had Social Media accounts on platforms such as Twitter and Google Plus.

It’s surprising to see that Facebook is maintaining it’s younger audience considering that Facebook has made viewing posts by friends and pages more difficult with recent updates. Many posts will even go unseen depending on whether they receive enough engagement. With such annoying updates, it’s easy to think that this younger audience might flock to another platform such as Twitter.

However, than has not been the case so it’s important to realize that Facebook is still an extremely valuable platform especially among a younger adults. If you’re a company that targets a younger audience it will be important for you to have a strong presence on Facebook that engages this audience.

If you want to read more about the original article you can visit http://mashable.com/2014/05/06/facebook-highest-reach/